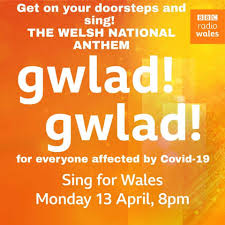 Rhys Mills was invited recently to speak to various radio stations across Wales on behalf of the 'Sing For Wales' Campaign, which Rhys had a hand in organizing.

The 'Sing for Wales' campaign, proposed by Caerphilly local Sarah Evans, culminated in thousands taking to their front-doors Monday afternoon to sing the Welsh National Anthem.

Speaking to LBC Radio, the Councillor said that the campaign was 'for everyone who are still going to work, everyone who work stocking our super-market shelves, and the children who can't go out and see their friends'.

The campaign proved a viral success, with a Facebook page set-up to support the cause gaining over 70,000 members in little over two weeks.

In another interview with BBC Wales, Rhys Mills spoke of how through spreading the message on social media, "we want to reach everyone in Wales" with the message of solidarity to key workers.

"It's something in Wales we do well.  In every community, there's people out seeking to help".

See Rhys Mills talk below to LBC about what the Campaign aimed to achieve.